Town Center has a unique geographical form consisting of separate residential areas dispersed throughout the Downtown area. It is a very diverse area with dwellings ranging from multi-level high density buildings to single family homes. There are presently six non-contiguous neighborhoods in Town Center which are Amesbury Hill, Banneker, Creighton’s Run, Lakefront, Vantage Point, and Warfield.

The area that is now the Vantage Point neighborhood has a long, rich history. It is included in the tract which the honorable John Dorsey patented as Dorsey’s Adventure in 1688 on a tract of land known as Felicity. A 1798 historical record lists Deborah Sterrett as the owner of Felicity which, at that time, contained a little over 1100 acres. Her son Charles who, sometime after 1800 changed his name to Charles Sterrett Ridgely, probably to inherit the estate of an uncle, inherited the land. He built Historic Oakland in 1811. The house and surrounding land was subsequently sold to a number of prominent Baltimoreans including Robert Oliver and George Gaither, and then to the Tabb and Morris family. In the 1960’s it was purchased by Rose and Sigmund Price. In later years the building served as a nursing home, the Rouse Company’s first headquarters for the Columbia Project, Dag Hammarskjold College and the county offices of the American Red Cross.  Today Oakland is home to the Town Center Community Association.

The Town Center Community Association was the fifth area developed in Columbia. The first residents moved into the Woodford C Condominiums in 1974. They were the first residences in Columbia to be built as condominiums. The first baby to be born in the village was Wendy Millman. She was born in 1974. The first Council Representative, Helen Ruther, was elected in September of that year. The first village board was elected in 1976 and Jeanne Nicholson served as the first chairperson. Stephen Rice, the first Teen Representative to the Village Board was appointed in l989. The first village office was housed in the Carriage House, a stable built by Robert Oliver on the grounds of Historic Oakland, and now the home of the Kittamaqundi Community, a non-denominational religious congregation. The first village manager was Sue Trainor.

In 1977 the village board began considering a way to obtain a community facility. They made the decision that the use of one of the historic buildings in the area would offer the most desirable alternative. Early in 1979 a presentation was made during the budget hearings requesting funds to renovate the Rose Price House for use as the community center. Robert Oliver constructed this small stone house on the grounds of historic Oakland as a laundry for the manor house. In the 1950’s Rose and Sigmund Price, who turned the manor house into a nursing home, purchased the manor house and cottage. The small house was named for Mrs. Price. Columbians John Levering and Wes Yamaka subsequently used it as an artist’s studio, The Eye of the Camel. CA renovated the space into a meeting room that accommodated up to fifty people on the main floor. The village office and a conference room were on the second floor. The village association moved into the building in 1980. 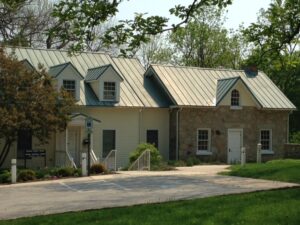 In 1986 the Red Cross, which owned and occupied Historic Oakland, decided that undertaking the major repairs necessary to maintain the building was not appropriate for them. CA began to explore the possibility of acquiring and restoring the building to house the offices of the Town Center Community Association and to be used as a public space to accommodate weddings, parties, business conferences etc. Negotiations were initiated with the Red Cross. The decision to purchase and restore the building was approved in CA’s FY 1987 budget. Restoration construction was accomplished during 1988-89 and Historic Oakland, including the Town Center village offices, was opened in October of 1989. In May of 2002, the management of Oakland was transferred to the Town Center Community Association. Oakland was home to the African Art Museum of Maryland from 1989-2011.

Carved out of land that was originally part of the Mercer Tract, the Amesbury Hill neighborhood was set aside as an estate area for Rouse Company executives in l973. Since Columbia had opened its arms to people from all socio-economic levels, there seemed to be a need to offer estate lots for those people who might have been interested. The six lots were named AAmesbury Hill [email protected] and they are located on Amesbury Drive, branching off from Ten Mills Road, near the intersection of Rt. #108.

The parents of Lucy Mercer, the personal secretary and alleged paramour of Franklin Delano Roosevelt, owned the Mercer Tract. Their original house is still standing on what is now Amesbury Drive and was purchased from the Rouse Company by Warren Fuller, the former president of Howard Research and Development Co. The house is a New England Cape Cod with large Georgian columns and is currently owned by Greg and Margaret Williams. It has been reputed that FDR visited Lucy Mercer and her family many times here in Howard County during the 1930’s and he stayed at Oakland Manor guesthouse, approximately three miles away.

The first new house built in Amesbury Hill Estates was the Rice House, when construction began in 1976. The Vincencio House and the Peterson House soon followed this. To date, all of the lots have been developed with a variety of architectural styles represented, and some of the homes have swimming pools and tennis courts.

Creighton’s Run, a neighborhood off Route 108 consisting of 28 single-family homes, was developed in 1979. Originally part of the Griffith farm, this area was purchased by the Rouse Company and sold to Winchester Homes for development. Dan Barr was the supervisor of construction. He bought a house on Davidge Drive and still resides there. Dan says that he named the community after his boss’s, boss’s, boss. So that’s who Creighton was.

In 1990, in the otherwise low landscape of Town Center, a tall building was rising. It has become Vantage House, a Life Care Retirement Community. It opened on October 15, 1990 with 13 floors, the Towers, in which there are 220 independent-living apartments plus a medical wing with 26 assisted living units and 44 nursing beds.

Vantage House celebrated its 10th Anniversary with approximately 205 residents in the Towers. They included seniors from almost every state, with an increasing number of parents whose grown children are raising families in Columbia. Vantage House is a non-profit corporation that is run by a Board of 14 Directors of whom 12 are residents of the Columbia area. It is also represented by a Director on the Town Center Board, beginning in 1992 with Margaret Woodward, Alice Scates, and presently by Burt Knauft.

Early in 1998 the first residents moved into Gramercy, the first apartments in Town Center and the first units in the Warfield neighborhood. Early in 1999 residents moved into the Whitney townhouses, the second units of the Warfield Triangle neighborhood. The Columbia Town Center Apartments and Governor’s Grant Townhomes were completed in 2002, and the Evergreens at Columbia Town Center and Lakeside Columbia Town Center were completed in 2006.  Next came the Metropolitan that opened in 2014 followed by Ten.M and M.Flats in 2017.  Not to be outdone Juniper opened in the Merriweather District in 2020. Next up is Marlow which broke ground in early 2021 and will open in late 2022.  Columbia….Always growing, always looking forward and always valuing each person’s contributions. 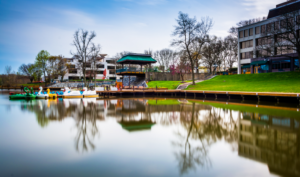 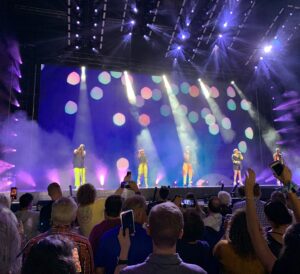 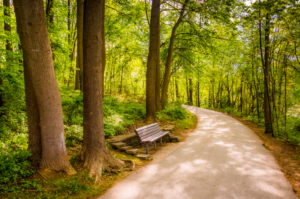